Eco-anxiety and the politics of hope: a reflective opportunity to build resilience

IDS student Jennifer Uchendu (MADev13), shares her thoughts on the emergence of eco-anxiety, proposing that it is both a challenge and opportunity for global climate action. Photo by Simon Migaj on Unsplash

Climate change is a wicked problem with uncertainties driving a lot of people into a continuous cycle of panic. Beyond the previous feeling of ‘climate guilt’ which made certain people feel complicit with global warming, this is full-blown eco-anxiety that is spreading through the West and within developing countries, albeit in obscure ways. Eco-anxiety was first defined in 2017 by the American Psychological Association as ‘a chronic fear of environmental doom’. It encompasses issues like climate anxiety, denial, trauma and grief mostly felt among young people, and parents (especially mothers); where individual actions no longer seem to be enough in light of recent occurrences.

But how did we get here?

In 2018, the UN intergovernmental Panel on Climate Change (IPCC) released a report calling for ‘urgent and unprecedented changes’ to reduce 45% of carbon emissions by 2030; this gives us only 10 years to save the world. I believe this report set the tone of urgency that defined this moment. Individual actions such as tree planting and energy conservation are now complemented with; lesser meat consumption, a push for recycling and greener transportation options, and most significantly, through protests and strikes that feature young people as the front-liners. From Extinction Rebellion (or XR) to the School Strike for Climate Movement; young people in the West are demanding governments declare climate emergencies and set up green new deals to bring about systemic change.

The panic of climate change has indeed come to stay but it is being felt by everyday people who are weighed down by the realities of environmental challenges in our world today. From the increasing floods, droughts, heatwaves and wildfires to the more complicated issues like social unrests, insecurity and economic losses which seem intangible.

Five years ago, I believed that humanity stood a chance against climate change. I even founded a platform to inspire action from young people in Nigeria. Considering how much worse things appear to have gotten since 2015, my optimism is being slowly replaced with gloomy reflections of a worn-down planet with crippling life support systems that can trigger resource wars, exacerbate disasters and displace millions of vulnerable people. Studying development has also revealed to me the linkages between social and environmental injustice, where poor, struggling countries in Africa suffer from the impacts of emissions they contributed the least to.

This reality fills me with despair and anger because climate change is central to achieving the broader 17 Sustainable Development Goals. Yet, nations of the world still struggle to find lasting solutions. African countries also need to deal with local environmental challenges that directly impact the health of citizens. The soot pollution in Port Harcourt, Nigeria for instance has persisted for almost four years, leaving persons unable to relocate from affected sites with a high risk of respiratory health issues.

Climate change, now referred to as climate emergency or climate crisis has also dominated mainstream media. The reality of this catastrophic future is overwhelming as these disasters become more complex and unpredictable. When I think of bringing children to this world for instance, I get afraid of their safety and their future – I am concerned about the kind of world they will live in and the magnitude of environment and socio-economic challenges they could be faced with. It feels like with climate change, there is nowhere to run. 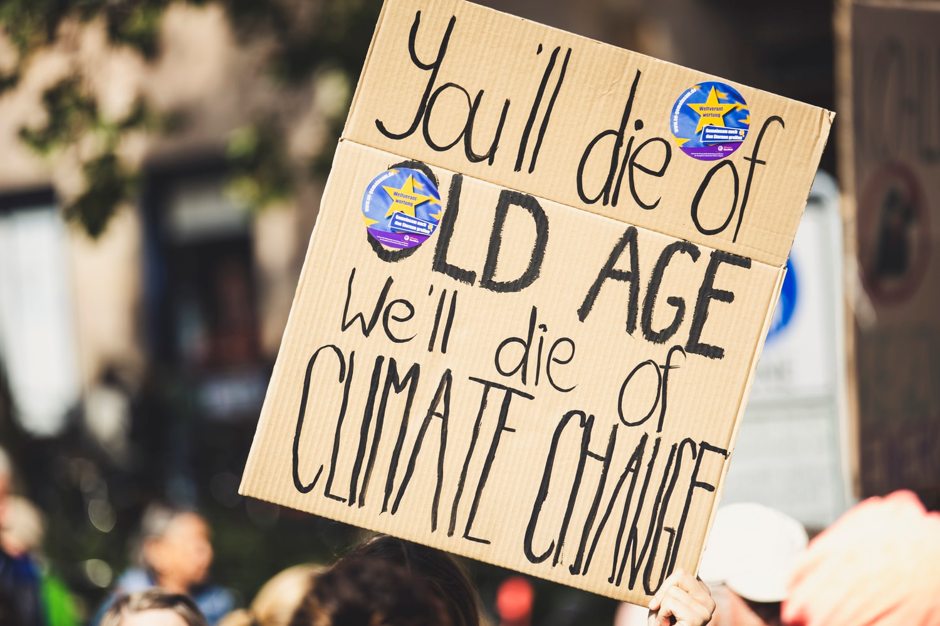 Photo by Markus Spiske on Unsplash

I believe these overwhelming feelings are valid, the powerlessness that individuals like me who deeply care about the planet and their future contend with is creating a whirlwind of anxiety, fear and grief that therapists and even development practitioners need to manage in their own personal work and within the communities they serve. There is a sense of urgency within this era that is felt more on the individual level and more reflective spaces are needed for people to share their fears, their coping strategies, and the little possibilities of hope for better ways of adapting to the crisis.

Several organisations are now taking steps to manage these forms of anxiety. For example,  within my organisation back home in Nigeria, we have established the need to address the mental stresses of environmental issues through the creation of safe, virtual and physical spaces that allow dialogue, working with certified mental health groups.

In Brighton, I was pleased when I visited ONCA, a small art gallery that works on environmental and social justice. I joined a circle of people who shared their fears and feelings around climate change but also the other negative impacts of capitalism that we were all victims of. ONCA also works with the Climate Youth Strikers and provides them with a platform to creatively express themselves and build power with each other.

The Climate Psychology Alliance is another organisation with a list of professionals that offer mental health support for people dealing with eco-anxiety. A climate grief session was on the agenda of the D & C days at the side-lines of COP25 in Madrid last year, the session recognized the need to counter eco-anxiety with empathy, compassion and altruism.

Eco-anxiety proves that people are concerned and through psychosocial support, skills around adaptation and living with the uncertainties of climate change can be created. This is a skill everyone will need; it is an opportunity for us to build resilience and come up with new ways to take action. The narratives of fear and powerlessness need to be replaced with energy and action. We must realize that the divisions that exist among people of the world blur out when climate impacts strike, we will need to come together as humans for a shared planet and take action to save the planet for the present and future generations.

We can begin this process by discussing climate change with friends and families; by sharing our feelings of hopes and fear, we create platforms for low-hanging, effective ideas of people-led climate action. This is part of a series of blogs written by current IDS masters students and PhD Researchers. Look out for other blogs in this series, including: Barricades and democratic tsunami in Barcelona; Muxes, the third gender that challenges heteronormativity; That Night a Forest Flew; Eco-anxiety and the politics of hope: a reflective opportunity to build resilience; About Greta Thunberg and silenced environmental leaders; From alleged offenders to confessed sufferers: Participatory process in action; Women’s struggle in Afghanistan: An Insight from a Human Rights perspectives; Feminist Latin American movements demanding sexual and reproductive health and rights; India’s Progressing Ambitions in Development Finance; The British voting system for disabled voters is broken: How to fix it… plus others to follow on- Rwanda on a participatory theatre project, and USAID’s digital strategy.

Mina is on a mission to decolonize development with her organisation Human Research Consultancy. She shares her inspiration and journey as a social entrepreneur in the UK. More... Barricades and democratic tsunami in Barcelona