"That night, a forest flew"

Humans have destroyed half of earth's forests. “Seed bombers” are marketed as saviors of the planet. While technology is essential to solve problems; to what extent should AI replace human effort? Image: from Unsplash.com
As geoengineers spend millions researching on carbon-storage technology, Earth’s natural carbon-sinks are being depleted through excessive deforestation. With 26 billion trees currently burned down annually and only 15 billion replanted, we need millions of trees to combat the effects of global warming. Some claim there is simply not enough land to plant the amounts of trees necessary to combat climate change. While others claim even if we plant millions of trees, they will take decades to grown and turn into effective carbon-sinks.

The predicament therefore is whether nature can win the war on climate change? Maybe with a little help from humanity.

Aerial Reforestation: A single man can plant nearly 1,000 trees a day, but with aerial reforestation, the number jumps to 900,000

Aerial reforestation is now being seriously cogitated upon as a possible solution to solve the deforestation crisis, and subsequently combat climate change.


“The possibilities are amazing. We can fly at 1,000ft at 130 knots planting more than 3,000 cones a minute in a pattern across the landscape – just as we did with landmines, but in this case each cone contains a sapling. That’s 125,000 trees for each sortie and 900,000 trees in a day” Peter Simmons, representative of Lockheed Martin.

Lockheed Martin is a quintessential military innovation company which plans to plant one billion trees annually, using reconditioned military planes. The proposed program uses some of the fastest growing trees in the world and claims to counter the negative effects of deforestation within a few years.

Aerial reforestation uses tree cones that are pointed and designed to bury themselves in the ground at the same depth as if they had been planted by hand, saving the time and effort required in digging holes and filling them with soil. The tree cones contain fertilizers and materials that soak up surrounding moisture, watering the roots of the tree. The containers are metal but rot immediately so the tree can put its roots into the soil. Taking into account the numbers, the technology certainly is impressive. A single man can plant nearly 1,000 trees a day, but with aerial reforestation, the number jumps to 900,000. Thus, offering an innovative 21st Century solution to combat the deforestation crisis. 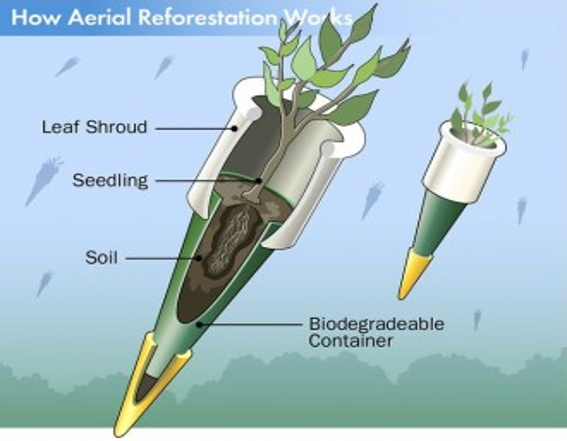 The Research: the most effective solution?

A 2015-Serbian study  aimed to understand better the aerial means and flight conditions most suitable for aerial sowing as well as conduct research on seed bomb preparation. The ideal environment for tree bombs is one that had supported a forest in the past. However, other areas are a possibility as well with just a few minor adjustments — and using shrubs instead of trees. While it found positive results, it stated that further research is necessary to deepen our understanding of this new-age reforestation technique.

Another ambitious government-sponsored aerial reforestation program is being carried out in Thailand. Its slogan states “Drop Seeds, Not Bombs”. In 2013 the Thai Air Force dropped seed bombs over a wildlife sanctuary in Phitsanulok. Rural students helped make seed-balls from local plants, which are highly regarded for their economic value.

A controversial study published in Science Friday, set out to assess how much new forest the earth could support without encroaching on urban areas or farmland. BBC News reported that it came up with an area of 0.9 billion hectares, nearly the size of the USA. It claimed that planting 500 billion trees could remove nearly 25% of the existing carbon from the atmosphere and reverse the global average temperature rise. It also stated that reforestation is “the most effective solution” for mitigating the climate crisis. While others deemed this as far too ambitious, this study isn’t entirely futile as it offers thought-provoking possibilities to save the planet using gentler, natural geoengineer techniques. And aerial reforestation might be the best shot we have at accomplishing what this study claims is possible.
In Oxford, England, strides are also being made in the aerial reforestation arena. Founded by ex-NASA engineer Lauren Fletcher, the company has introduced game-changing technology into the realm of ecosystem restoration. Using drones, areas can be mapped beforehand, then tree cones are planted on an industrial scale. Most importantly, the technique utilizes optimum planting technology to increase carbon-uptake rates of the trees.

As it stands, billions of trees are lost every year because of human activity and natural disasters. During the recent UN Climate Summit , an agreement was made to restore 350 million hectares of damaged and deforested land by 2030. An estimated 300 billion trees would need to be planted to reach this goal. And aerial reforestation technology can make it happen.

While geoengineering techniques do have their flaws-they can alter the natural climate system in potentially dangerous ways- reforestation is possibly the safest artificial technology we can use to save the planet. Some still question whether humans have the authority even to bring drastic changes in natural earth systems, for instance, grow new forests. Use of artificial technology is and always will be a moral issue, simply because it’s an implicit reflection of the human mindset which enables us to feel like “conquerors” of this vast, magnificent planet. While others state that this may well be the only chance at making amends for anthropogenic induced global warming as well as excessive deforestation.

Some (non-artifical) ideas on how to get involved

This is part of a series of blogs written by current IDS masters students and PhD Researchers. Look out for other blogs in this series, including: Barricades and democratic tsunami in Barcelona; Muxes, the third gender that challenges heteronormativity; Eco-anxiety and the politics of hope: a reflective opportunity to build resilience; About Greta Thunberg and silenced environmental leaders; From alleged offenders to confessed sufferers: Participatory process in action; Women’s struggle in Afghanistan: An Insight from a Human Rights perspectives; Feminist Latin American movements demanding sexual and reproductive health and rights; India’s Progressing Ambitions in Development Finance … plus others to follow on- Rwanda on a participatory theatre project, , USAID’s digital strategy, and disabled voters and technology can be used to make elections more accessible. India’s development assistance through concessional grants and loans has more than doubled in the last five years, maintaining influence in Latin America, Asia and Africa. More...