Ever wanted to know more about the journey of IDS PhD students? Read on to find out more about Juan Carlos Pane's story so far - you'll find big ideas, vans, family, and the kindness of strangers.

Following the amazing news that IDS PhD researcher Juan Carlos Pane (PHD17) is a new fellow of the Eisenhower Foundation (EF) as part of their 2019 Latin America and Caribbean fellowship awards, I took the opportunity to have a chat with him about this and his IDS PhD journey so far.

Juan belongs to IDS’s Participation Inclusion and Social Change research cluster, and his supervisors, Marina Apgar, Jean-Pierre Tranchant and Keetie Roelen, are well-known within their respective fields for their participatory approach to research. His PhD research, with fieldwork in Paraguay, is taking a participatory mixed method research approach to understand the empowerment effects of multidimensional poverty reduction programmes. He has more than a decade of experience in designing, developing and supporting projects in the areas of poverty, civil society participation, rule of law, and anticorruption programs.

“Juan came into the PhD process with a clear long term commitment to creating real change in the world and specifically his country, Paraguay. His being awarded the Eisenhower Fellowship is a testament to his ability to navigate the journey of academic rigour alongside his enthusiasm and dedication to contributing to a better world”, Marina Agpar, IDS Research Fellow and Juan's PhD Supervisor

I started by asking Juan about his application to Eisenhower Foundation (EF) and why he thought he was selected. It was obvious from the first words from Juan that, although this is an individual award, the ideas and plans behind the application and award is very much a joint effort between Juan and his wife - fellow IDS PhD researcher Marie Claire Burt (PHD17).

They have big plans to create a centre for cross sector engagement and learning to eliminate poverty. Juan explained to me that they wish to connect resources (i.e. people, organizations, time, natural resources) through a learning centre with research for effective change, initially for Paraguay, but the goal is to end poverty regionally and then worldwide. The EF program comes with a six-week tour of the US connecting the Fellows to individuals and networks who can help make their visions a reality. I asked Juan why he and Marie Claire applied to IDS to PhDs, after all, neither of them had no experience of studying at IDS or even in the UK before starting their PhD journeys here. He explained the appeal of IDS’s reputation as a hybrid institution; a combination of academic rigor and research for practice. The decision to be embedded with the Participation cluster at least partially influenced by his experience of working for the Paraguayan government; an institution he described as ‘super top-down’.

Joining a PhD programme with no experience of the Institute’s way of learning and teaching, was an eye opening experience for Juan. He told me how he instantly felt at home, everyone – from supervisors, to colleagues and research fellows - was eager to learn as much from him as he was to learn from them. He told me of the close relationship that all the PhD Researchers in his cohorts have and is confident that they will be life-long friends.

Poverty Elimination in an Island Surrounded by Land 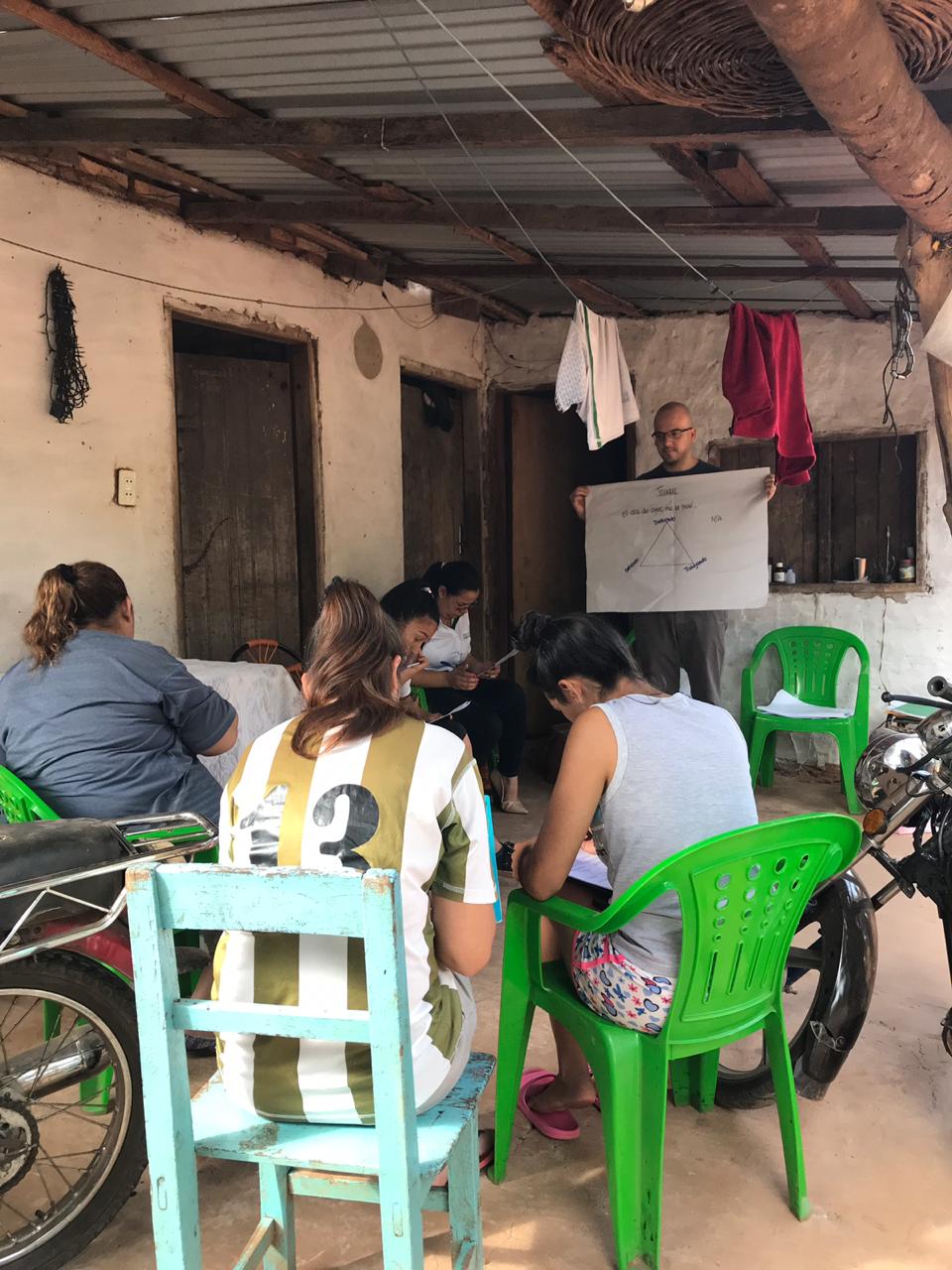 I was struck, during our conversation, by Juan’s desire to connect with as many different cultures and draw together experiences and learn from them in order to create tangible solutions for the making the World a better place.

He tells me that he feels that his home country Paraguay, due to its history of dictatorship (the first internationally accepted free and fair election wasn’t until 1993) and language barriers (Paraguay’s dominant language is an indigenous one, Guaraní) often “feels like an Island surrounded by land”.

In the next breath, Juan is telling me about the trip he took across the Americas; from the USA to home, Paraguay, eventually covering 17 countries, significantly expanding his experiences of different cultures and backgrounds. Juan explained that this trip provided his inspiration for a small organisation that brought together over 40,000 people across Paraguay via a knowledge sharing fair that travelled around the country.

This desire to connect knowledge is at the heart of Juan’s PhD research with Poverty Spotlight. A poverty elimination programme developed by Fundacion Paraguaya that provides a metric and a methodology to enable families to assess their levels of poverty and carry out personalised strategies to overcome their specific deprivations.

The philosophy of believing that individuals have, and can contribute to their own strategies and solutions for alleviating poverty is one that Juan clearly believes in. He is passionate when explaining to me that he wants to use his research to help big organisations understand that experts do not always know better than the people living the experience of poverty.

The Power of Sharing Stories & Kindness 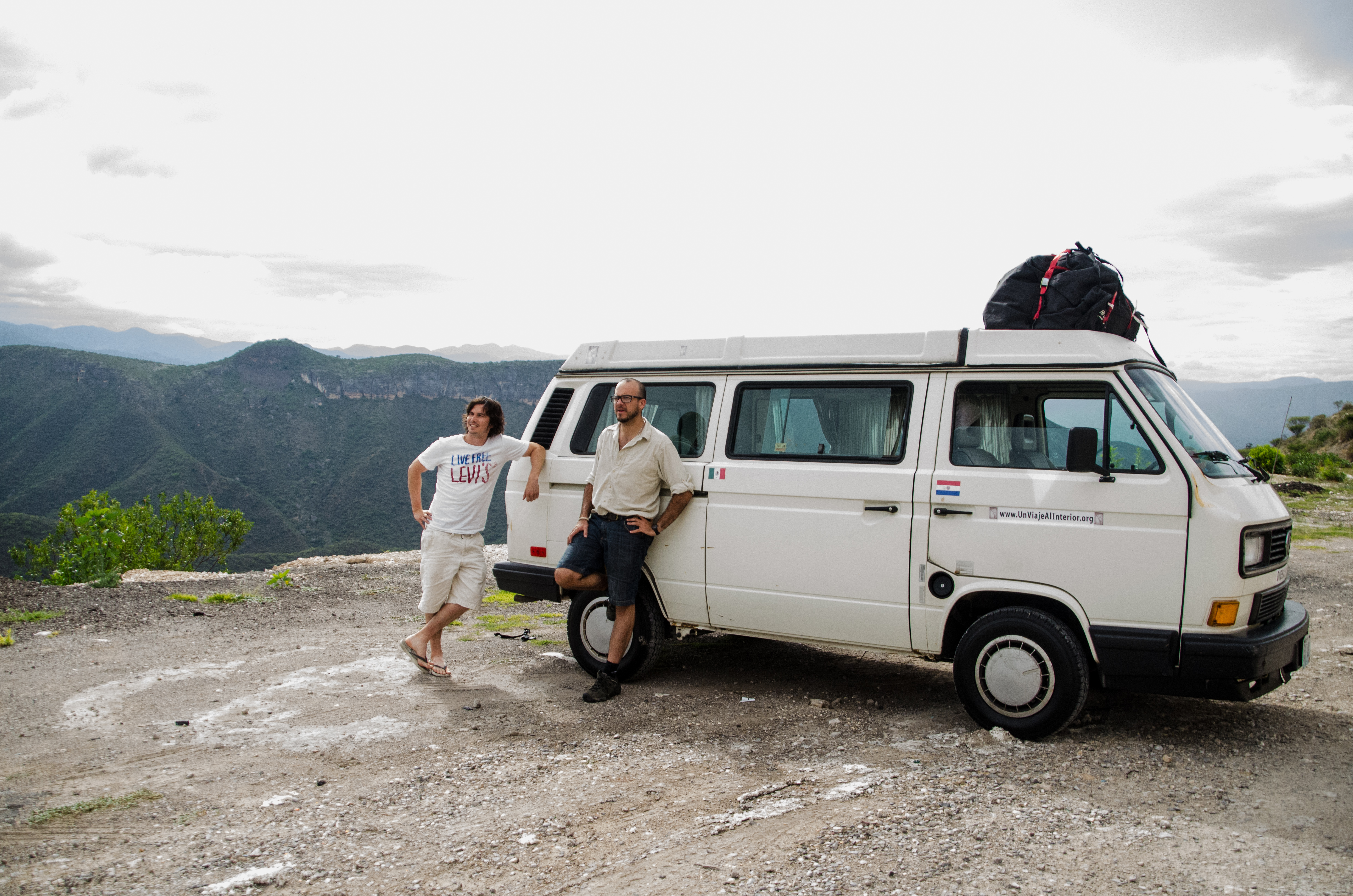 When I asked Juan to tell me about any especially memorable trips, I expected to hear more about his US-Paraguay trip. What I didn’t expect was the story of Jasy (Moon in his Paraguayan native language), their campervan for the trip. It was important to Juan and his travelling companion, Alberto, that they had a VW as the spare parts are fairly easy and cheap to get hold of across the Americas, but they were living in St Louis, Missouri and most of the VW campers for sale were, of course, approximately 1,800 miles away on the Californian coast. Just as they had convinced themselves to make the trip to the other side of the States to buy a van, they saw the perfect van in a garage in St Louis and wondered whether the owner might be persuaded to sell.

Ringing the doorbell a couple of times, and having no response, they resigned themselves to having to travel to California to get their van. Just as they were about leave the owner of the van, an elderly American man named Bob, came to greet them. 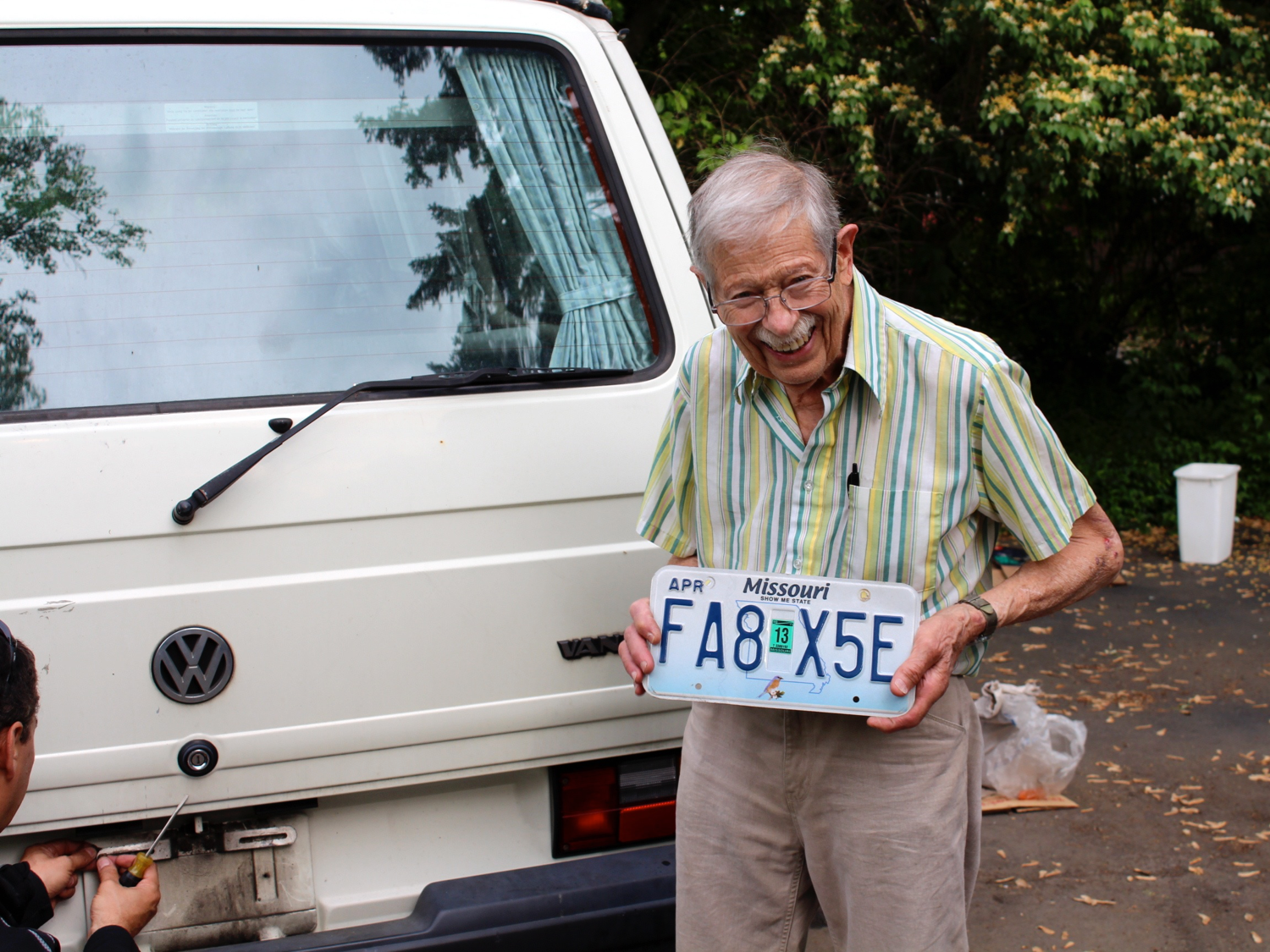 Bob told them about his long history with the van. He and his wife had bought the van to travel around Europe, and they enjoyed the experience so much that they shipped the van back to the States and travelled all the way to Alaska and back. He kept the van in good working order, but sadly explained that he didn’t think he would making any more trips in it.

For Juan and Alberto this sounded perfect, they wished to take the van all the way to the other end of the Americas, how could a fellow adventurer like Bob turn down their offer? Bob told them that the van wasn’t for sale, but before they could say another word he explained he was giving them the van, and wouldn’t take no for an answer, filling in the paperwork there and then!

Juan and Alberto’s trip officially started from Bob’s home, in the newly named Jasy, and Juan’s belief in the power of sharing stories and kindnesses was reinforced. 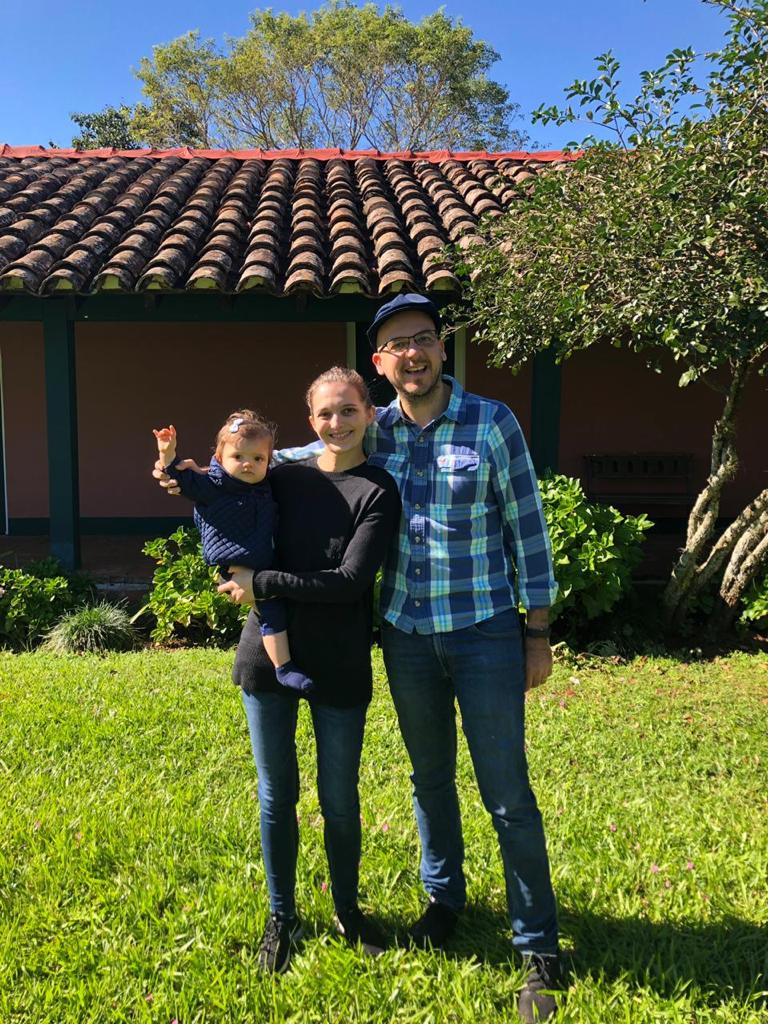 Just before we signed off I asked Juan whether there was anything else he’d like to mention. I couldn’t see his face, but I felt his smile when he talked about his daughter. With both parents studying at IDS when she was born I’m confident that Juan and Marie Claire will be working hard to make sure that their daughter’s future is one filled with a passion for big ideas and the elimination of poverty across the world. A current IDS Masters student tells us why it is vital the international development community pays attention to the situation in Hong Kong. More... Slides from the welcome to IDS event hosted by the IDS alumni office for new students More... Sharing the best in global development research for policy and practice. More... Donate to the IDS Scholarship Fund and help change lives