Holding the Private Sector Accountable in Development: The Case of Southern Water

Southern Water polluting the sea with raw sewage is a critical issue in Sussex. Read how civil society organisations have used data to hold the company to account and mobilise governmental bodies. The Southern Water case is historical: the Environment Agency found the company guilty of more than 8,400 illegal sewage discharges between 2010 and 2015, resulting in a record fine of £90 million.

The rivers and seas of England are overflowing with raw sewage, chemicals, and microplastics, says a parliamentary report recently published. Increased use of the sea for sports and leisure during the Covid-19 pandemic led to more people mobilising against water pollution.

Although water companies in the UK are permitted to discharge untreated sewage when the system is overwhelmed during heavy rainfall, unlawful sewage discharge has been proven.

In order to see the whole picture, it is important to understand which actors are involved and the relationships among them. Therefore, in our investigation about the topic, we focused on the following perspectives to deepen our understanding through research and interviews:

Public pressure so far might have contributed to regulatory bodies and politicians being engaged with the issue. Following the record fine on Southern Water, an amendment to the Environment Bill was introduced in 2021, requiring water providers to follow standards such as delivering real-time sewer discharges and monitoring and reporting the impact of sewer discharges. When it comes to pressuring the private sector, the importance of targeting regulators and changes in legislation cannot be overlooked.

Among the various actors involved in pressuring to change the behaviour of Southern Water, civil society organisations play one of the most significant roles.

The Surfers Against Sewage (SAS) have been active for over 30 years and play a pivotal role in putting pressure on Southern Water to change its behaviour on sewage disposal in the sea. They have built a community of activists, attracting public attention to safeguard the marine environment.

Their primary goal is to influence changes in the water industry to result in more restrictive laws and regulations. Therefore, they focus on strategies to mobilise people to pressure the government to take action: organising protests, creating online petitions and "email your MP campaigns".

From the perspective of power dynamics, we can say that SAS focuses on pressuring the company by utilizing influential figures such as politicians and regulatory authorities. In this way, they can impose legal pressure over Southern Water.

Targeting actors with a closer relationship with Southern Water could effectively influence the water company: three MPs we spoke to during our investigation had engaged directly with SAS to discuss sewage disposals. 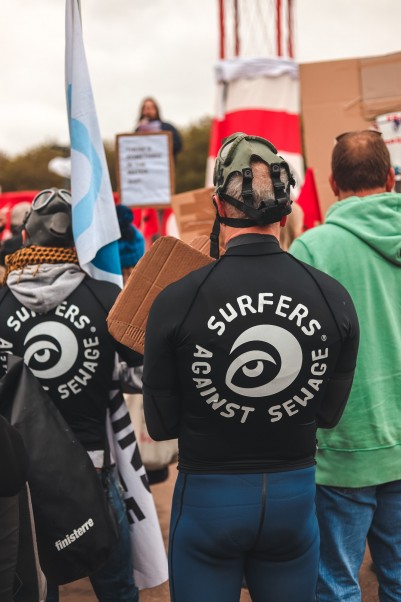 Surfers Against Sewage at climate change protest in Brighton during COP26. Image by Marcelina Sarwa

Citizen Data Collection: A Tactic for Informing, Pressuring, and Contradicting the Most Powerful Players

Besides the civil society organisations, the UK regulatory framework for water services exists to oversee, license, and monitor water corporations regarding water quality, pricing, the environment, and consumer rights.

However, citizens have also been mobilising to collect data and create reports on ocean contamination since they are unsatisfied with available evidence from regulators regarding sea contamination in Sussex.

Since their formation, SAS has been collecting health data from water users who had experienced water contamination. Looking into the organisation's approach over time, data collection has gained strength in recent years and led to subsequent repercussions. As a result of this citizen action, SAS has released reports on water quality and ocean protection since 2010, which have been cited in national media outlets such as the BBC and The Guardian.

Not only have these materials supported public campaigns and protests, but SAS has intentionally used this evidence to influence and support politicians to make more informed decisions towards marine conservation.

In 2014, after its successful Protect Our Waves petition had collected 55,000 signatures in support of ocean protection, SAS launched the Protect Our Waves All-Party Parliamentary Group (POW APPG). This was the first cross-party platform that enabled MPs concerned about ocean conservation to communicate with one another. SAS is the group's secretariat, coordinating meetings and disseminating pertinent information.

Due to the increased use of the sea as a result of the Covid-19 pandemic, more local citizens have become aware of the contamination issues, leading to the formation of new pressure groups, such as the South Coast Sirens, founded in 2021 by local swimmers in Brighton.

The Sirens have also used citizen-collected data to exert pressure on Southern Water, launching a crowdfunding effort to assess the water quality along the Sussex shoreline.

South Coast Siren’s effort has not only helped to monitor the state of pollution in the ocean, but it has also helped to unite pressure groups across the country to form a broader collision, which will help them scale up their efforts and raise awareness of the issue nationwide.

Is Data a Game-Changer?

From the interviews we conducted with two Conservative MPs, one Labour MP and one Labour councillor, there was consensus on the value of data in making informed decisions. But the question is how far can the influence of citizen-collected data go in holding private companies accountable? Again, our interviewees expressed a similar viewpoint.

They argue that regular data collection by citizens is beneficial in the way that it helps to deepen understanding of the water contamination situation. However, it cannot be the solution to the problem since citizen-led science lacks credibility compared to water regulators’ data. 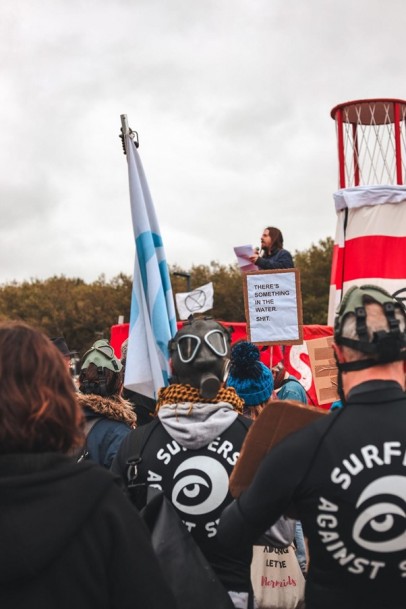 So, what is the Next Move?

Considering the statements by the politicians and water regulators, the influence of citizen-led data collection is regarded as helpful information but not to the extent that it could be a driving force for changing corporate behaviour.

So, what can be done to increase the pressure towards private corporations?

One possibility is to promote more collaboration amongst citizens and regulatory bodies who are ultimately responsible for data collection. This will enable the credibility of citizens and so can be considered influential by the politicians who have relatively greater power to pressure Southern Water.

Another thought is that besides adding pressure for sewage contamination to end, consider the other solutions that can deal with structural problems in UK's sewage disposal system.

Since it is a problem that affects everyday life, it is important to raise awareness of citizens regarding this issue and what each individual can contribute to improving the situation.

This text is based on an investigation project conducted by a group of six students for the module Power and Social Perspectives on Development at IDS in 2021. Group work was conducted by: Bruna Viana, Jumpei Ishimaru, Jungha Lee, Kaamilah Munshi, Kate Saner, and Marcelina Sarwa.