Other worlds are possible, and they do exist

IDS student Aylin Estrada (MADev14) re-imagines some well known development concepts. In collaboration with others they continue to seek answers to difficult questions about power and freedom. What is development? That’s the first question I ask myself every morning since I started studying at IDS in September. Back then, I naively thought that by now I would know the answer. But I don’t, well, actually I do. It depends. It depends on which theory or paradigm you refer to, and mostly, it depends on who you ask.

However, some classroom concepts are crucial to understand the practice in the field, i.e. real life. And although the answers may vary to the extent of the number of people in the world, for the sake of this post, I wanted a collaborative outcome. Furthermore, since one of the definitions of development refers to good changes that give people the ability to live at their best, we need to know what the best is and for whom.

The first concept to deinstitutionalise is freedom. When conceptualising freedom, Amartya Sen defines it as a mean and an end of development. However, to exercise this freedom it is necessary to count on capabilities and functionalities, a complex dual-relation, according to Sen. In order to speak in public, for example, a person can have different notions of the possible ways to do it. It can be by singing, by debating or reciting poetry.

Then the acts of choosing and doing the activity of their preference is the execution of a functionality. However, being able to think about these possibilities and make them happen not only depends on us but also on our context, i.e. our society, the government that assists us, the economic model that we exercise or the cultural norms in which we have grown up. Our freedom depends on these factors.

If development is intimately related to freedom, but freedom depends on determinants that vary from one country to another, from one community to another, is there any basic aspect that must be understood by all?

Freedom is about capabilities and functionalities: it’s about having a citizenship, but mostly about the recognition of your own identity in an occupied country such as Palestine.

Freedom is about your own reflection and positionality: it’s about the self-love in the practice and the respect for the autonomy of others, mostly in a country like Mexico, where indigenous communities are still excluded.

Freedom is also egalitarian and intersectional: it’s about acknowledging that our privileges shouldn’t be privileges but rights for everyone. This points out the case of Japan, whose economy is ranked 3rd but is the 126th due to its gender gap.

However, to exercise freedom it is clear that having at least some power is necessary. Relationships across and within societies are based on power dynamics. This happens between social groups, i.e. castes, economic classes, genders and other structures where hierarchies are still prevalent. Hence, the complexity lies in detecting what holds those relationships. Even when dominant behaviours are obvious, the power exercised may be hidden due to cultural practices or ideologies.

How can we remove a power that cannot be seen? How to counteract that power with more power? To what extent can they impede or motivate development? What do we do with it?

Development can be used to counteract systems that act with power over others. This power can come in different modalities. What makes it meaningful is the way we use it:-

Illustration above by Yu-Hsin Chen.

Both freedom and power can be perceived as means and ends, but what end then? If development is about good changes, how do we measure these positive changes? Where should we focus our limited resources? 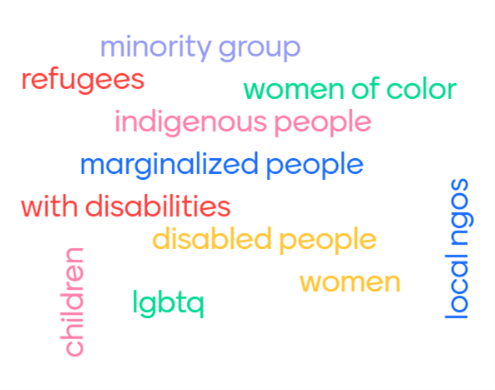 A notion recently used is that of social justice. Different researchers, such as Naila Kabeer, echo this concept as a common goal at the heart of international development frameworks. Social justice is about fairness within communities, about redistribution and equality. It focuses mainly on the most vulnerable groups. Groups that for historical and cultural reasons have always suffered and lagged behind the average. For them, even having access to the most basic resources and services is difficult.

As development practitioners (because we practice development?), we should localise these groups. It’s not possible to talk about redistribution if at the entry point the pathways offered by the social institutions are not the same, nor offer the chance to go further.

This post aimed to visualise what development means outside our building while we recall the well-known concepts. But also, to make visible the idea of different worlds in our own world. To make obvious that what we know is not what it is. Because development it’s not only about regressions, but about engaging with the dynamics of the people livehoods. It’s not only about theorising, but about creating in a collective way. It’s not just about participatory approaches but participation itself.

Development is what each of us aims to do with the chances we have and fighting for those we don’t. Development is not about assumptions, but about research questions that I need to keep asking myself and to the others every day.

Notes from the author:

This post exists thanks to the collaboration of Azza Abumandeel, Sandra Juan and Wakana Kato, whose experiences and insights were shared through a participatory activity. Also thanks to Yu-Hsin Chen, Rana and the compas who share their dilemmas about development every day. It is dedicated to those of us who have accepted, while we sigh, that it all depends.