Vulnerabilities in Agra's Informal Settlements in the face of Climate Change 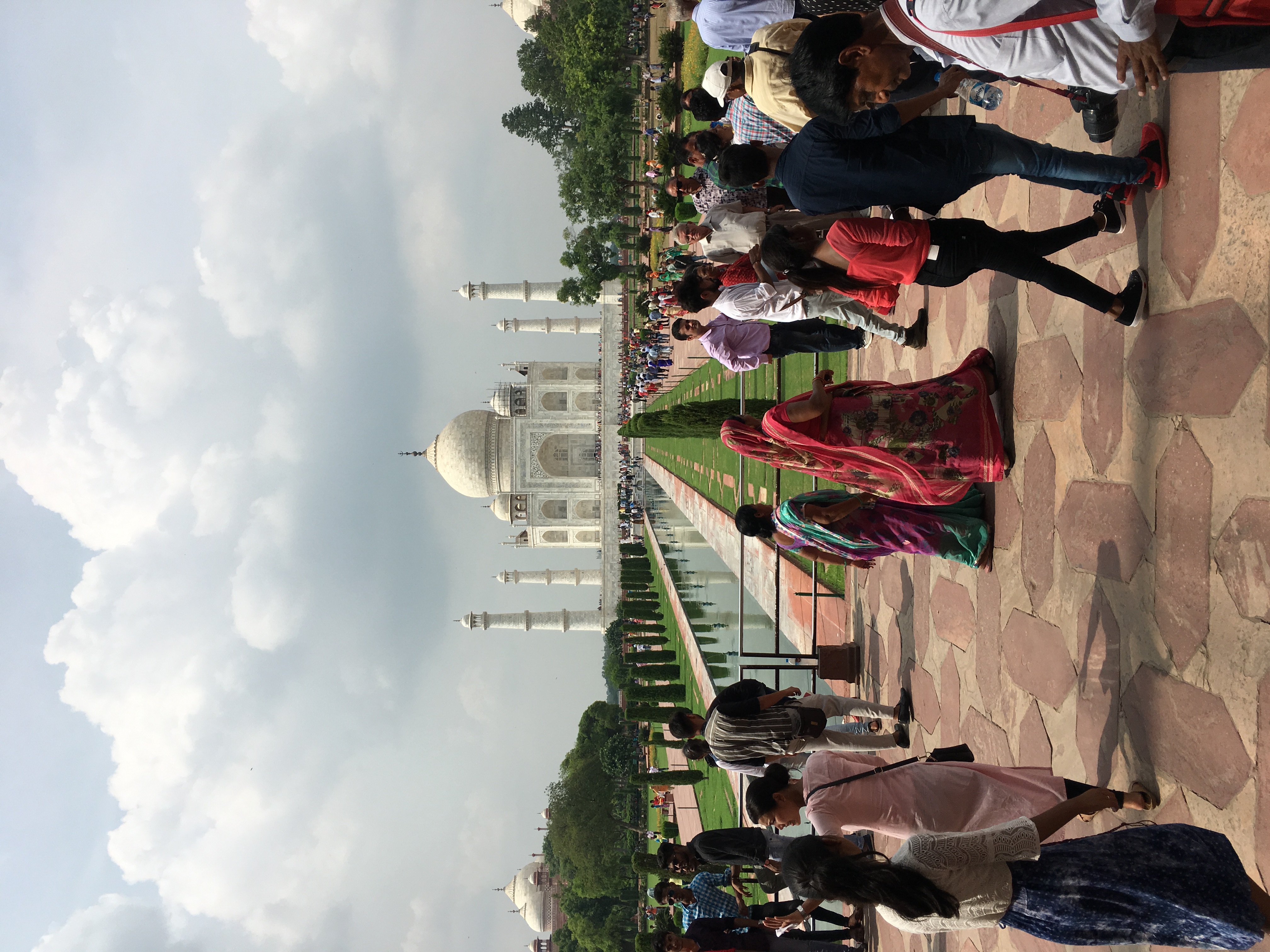 Image above by author: Major tourist attraction of Agra, the Taj Mahal, one of the seven wonder of the world.

Agra is undergoing rapid urbanization with the objective of tapping into a tourism economy. The lack of housing and basic services at a pace that meets rapid growth has resulted in the development of slums and squatter settlements with wider ramifications on the health, safety and well-being of their residents. Agra has 417 slums with 123,846 households making up for about 56% of the urban population.

Direct impacts of climate change on Agra are felt in weather events of rising mean temperatures, extreme heat waves, and vulnerability to flooding. Agra shows a stronger trend of warming than surrounding cities of Delhi, Jhansi, Jaipur and Ajmer at 0.18̊C/decade annually.

The increase in average surface temperature is creating urban heat islands within dense informal settlements. Vulnerable communities living in informal settlements along the Yamuna riverbed face the challenges of increasing heat, contaminated water, and the possibility of flood related risks and displacement in the future. Their ability to cope with these changes is a function of location and social-economic inequalities.  Their ability to seek a better quality of life, manage resources like water, and secure social support is contingent on individual and collective capacities to navigate through multiple stresses, including climate impacts, in everyday life. 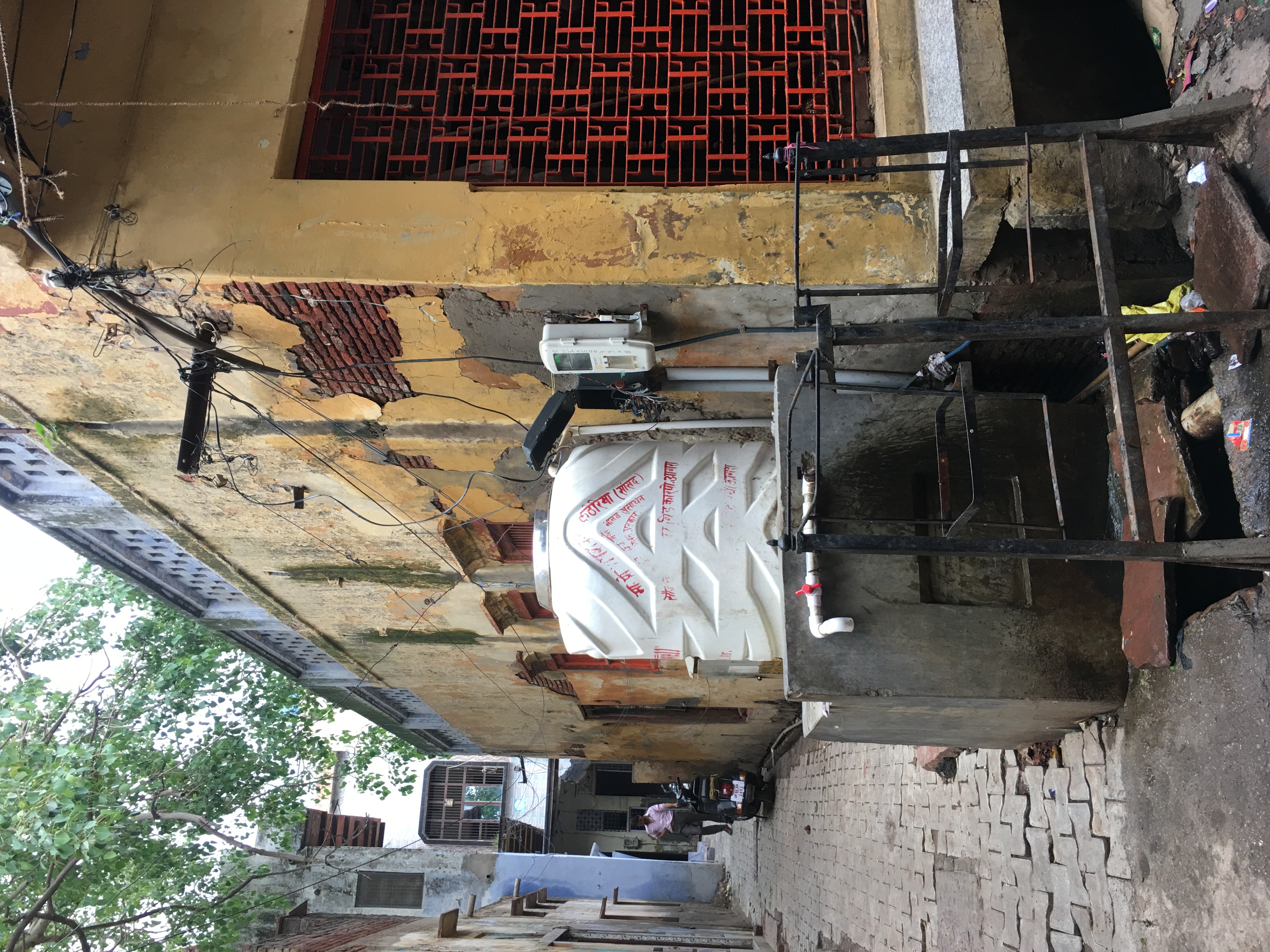 Image above by author: A neighbourhood water tank connected to a submersible in Tajganj provides water unfit for consumption at the expense of depleting groundwater.

On 2nd May 2018, there was severe dust storm and rain throughout Western Uttar Pradesh. “It started at 7 in the evening and just kept getting severe. Trees were fallen all along the road. I had to park the auto at a friend’s house and walk back”, says a visibly distraught Noor Mohammad. Agra’s better-off residents made light of the extreme event on social media, welcoming the rains. But many houses in informal settlements were reduced to rubble, flooded, electricity supply cut off. That night 43 people died in Agra. The storm was said to be caused by a confluence of conditions - abnormally warm temperatures, high levels of evapotranspiration and an unstable atmosphere - all factors attributed to climate change.

53-year-old auto-rickshaw driver Noor Mohammad lives in Mahua Khera, in suburban Agra. It takes a while for him to get to the Taj Mahal Precinct every morning, where he works. Until last year he lived in Tajganj with his wife and two children, living in tight quarters of 50 square yards they shared with the family of his older brother but much closer to Taj Mahal Precinct for work. However, his reason for moving wasn’t on account of the substandard housing, lack of urban services and highly unsanitary living conditions in the city’s slums, this is the reality Noor has grown up in and come to accept. His reason was water:

“Water was always a problem”, he says, “it was always running out. I was beginning to lose my hair bathing in it. I didn’t want that for my children”.

A major source of water to the city is contaminated and unfit for drinking surface water from the river Yamuna. Sewer lines are choked and untreated sewage from informal settlements along the basin directly flows into the river. 43% of slum households face acute water shortage without access to individual water supply connections. The groundwater level is steadily declining all through Agra, where overexploitation of ground water is felt in densely populated areas. The water level has dropped up to 200 feet in parts of Agra. As the water supply does not reach all informal settlements the government has provided hand pumps and public taps, shared between a large numbers of slum dwellers. These often dry up in summers and slum communities are left to the mercy of private water tankers and informal water markets.  With adverse topography, erratic rainfall, rapid urbanization, and overused groundwater, drought is a very real concern in Agra. 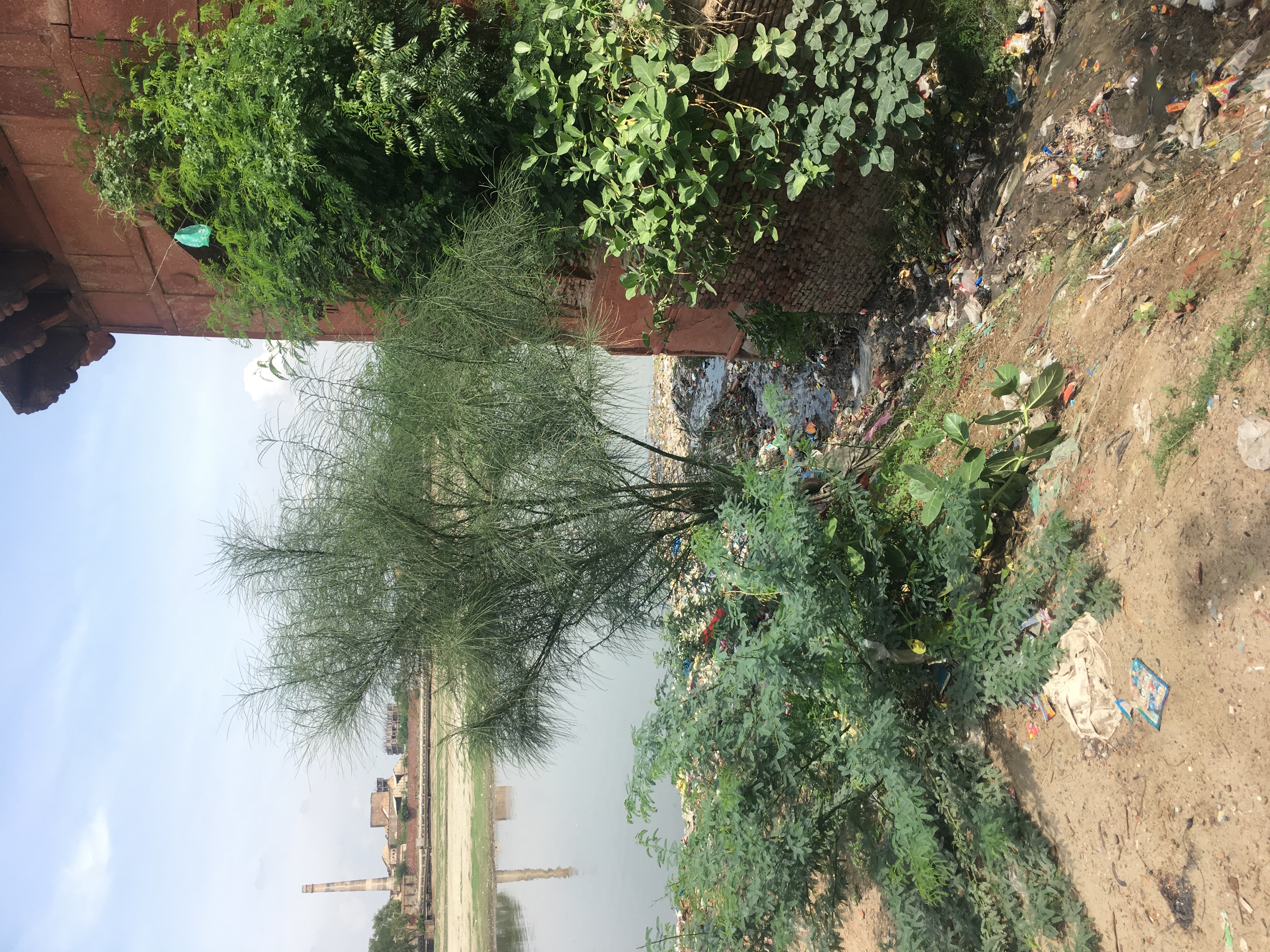 Image above by author: Sewage from surrounding informal settlements drains into the Yamuna river.

Water control barrages operated by neighbouring states and extreme precipitation in catchment areas leave informal settlements along the Yamuna basin at risk of flooding. Unmethodical urbanization is impacting natural drainage patterns and growing population contributes to increasing wastewater outflow into the river. A large number of settlements in low lying areas along the riverbank (like the Trans-Yamuna slums) who chose to live there for the locational advantage of being closer to the city are at risk of displacement or eviction due to the changing course of the river.

Consider the case of slums in Katra Wazir Khan where 23-year-old Sunny lives with his family of eight. He was playing cards with friends along the riverbank,

“I have always grown-up hearing that this entire place next to the Yamuna where we live will be taken from us by the government someday.”

He is talking about the Trans-Yamuna informal settlement that encroaches dangerously onto the Yamuna River basin. The last row of houses is thirty paces from coliform-ridden water and mounds of disposed garbage from the settlement. Yet Sunny has never seen flooding as a cause for concern, in his lifetime water has risen till almost touching walls of settlements before receding.

In 1978, the Yamuna over flew its banks and flooded nearly the entire old city by 2.5-3 metres. Today the Yamuna is a vestige of former glorious days, with the river stream occupying merely a tenth of the entire riverbed, inviting unscrupulous builders to encroach onto the riverine land to build multi-storied apartment complexes and for slum and squatter settlements to set base. Over the past couple of decades, almost the entire southern and eastern banks of the Yamuna (the river takes a 90-degree turn in Agra) have been encroached by informal settlements.

Often street sides become dumping grounds for household garbage; easily prone to infestation from vector borne disease. Wastewater is similarly also disposed in the Yamuna River. In the absence of a functioning sewage system, greywater and wastewater from houses is dumped into open drains along with solid waste, making it overloaded and choked. Due to this discarding, water logging is prevalent in slum areas and this in turn has direct consequences on the health of households. This situation is aggravated during heavy rainfall or events of flooding, especially for settlements encroaching Yamuna riverbed.

People like Sunny are vulnerable in lieu of their context; there are others who become vulnerable because of their livelihoods. 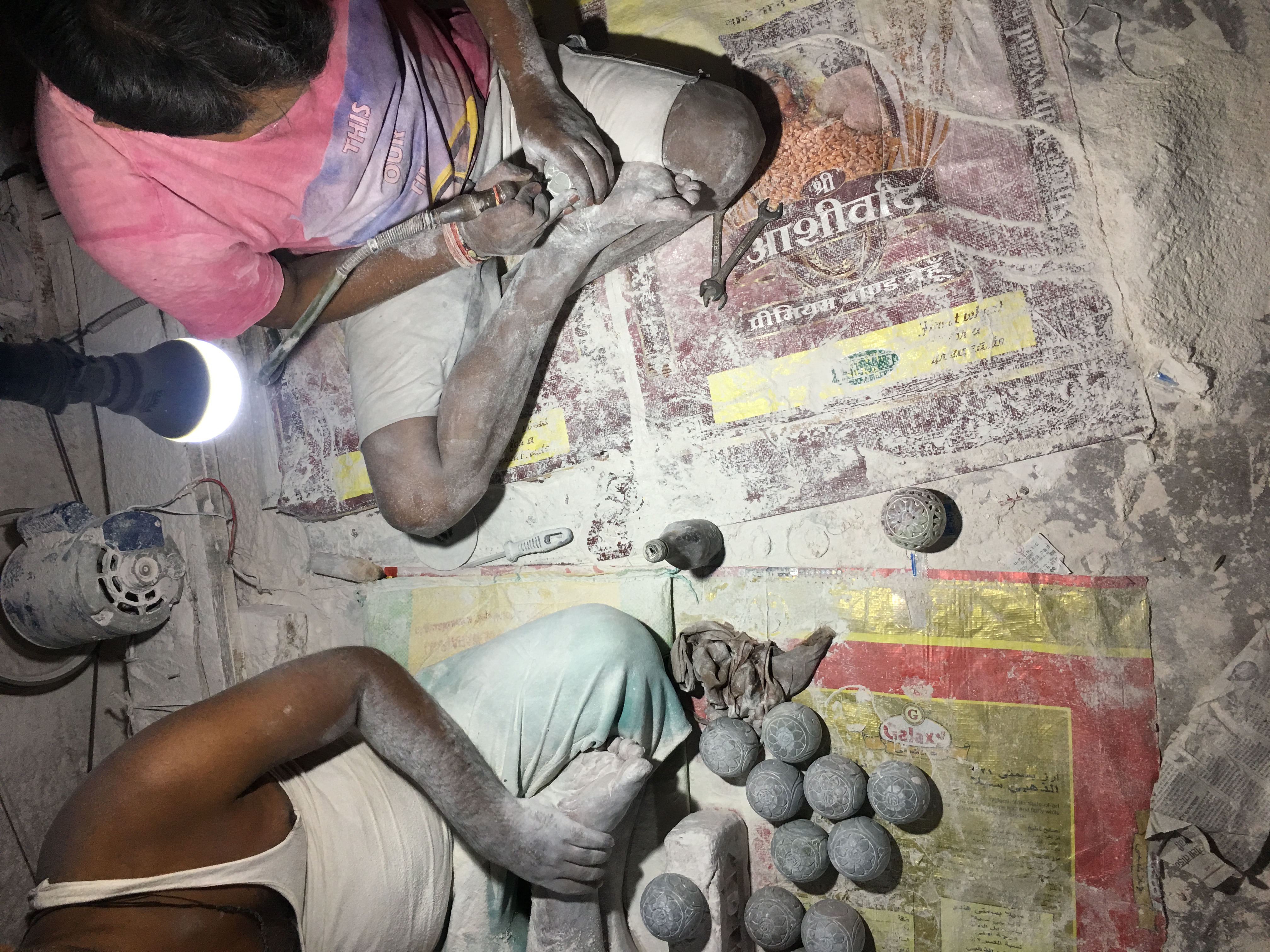 Image above by author: Marble craftsmen labouring in a makeshift factory in Kans Gate.

In a tight poorly ventilated room in Kans Gate, Gokulpura, 34-year-old Sanjay sits with five other men slaving away with a hand drill for 14 hours every day. They sit in their undergarments on the cold floor, sweaty faces masked by rags to avoid breathing in the white dust floating through the room. Daily he carves hundreds of the miniature Taj Mahals from marble blocks, to sell to shops in bulk. “I moved because Agra is where the big factories in this work are, where we get our orders from”. Sanjay is a migrant from Benares, like the others in the room. They acknowledge that working conditions are hazardous. “This is not something I want to do all my life; many like me come here work for some time, then go back and do other things”. Depending on their skill and pace they make anywhere from 300-500 INR ($5-7USD) a day. He has been doing this for over 8 years.

Here also climate plays an important role in worsening their conditions. Sanjay recollects two years ago their local submersible pump dried up. Water is crucial in the carving process. They were left to travel a kilometre to get water from the closest government tap. They buy additional Bisleris (Indian brand of bottled water) to drink:

“We are doing work that is killing us, [if] we drink that water, and it will definitely kill us. After 45 [years old] this work is hard to carry on, till the body has the energy to do this we do it.”

A large group of such labour work inexpensively to meet the needs of small shops and export houses. Small industries which used to work intimately with craftsmen are quickly shutting down. Now those that have lost business to big factories employ hundreds of men like Sanjay in equally adverse conditions for lower wages. Moreover, this mass labour force is mostly employed as casual labour. There are not many options; youth in Karta Wazir Khan spend their days gambling by the river. Sunny for instance, was unemployed and unable to find a job. Caught in a battle with giants, urban poor in informal settlements are left economically fragile and climate vulnerable. 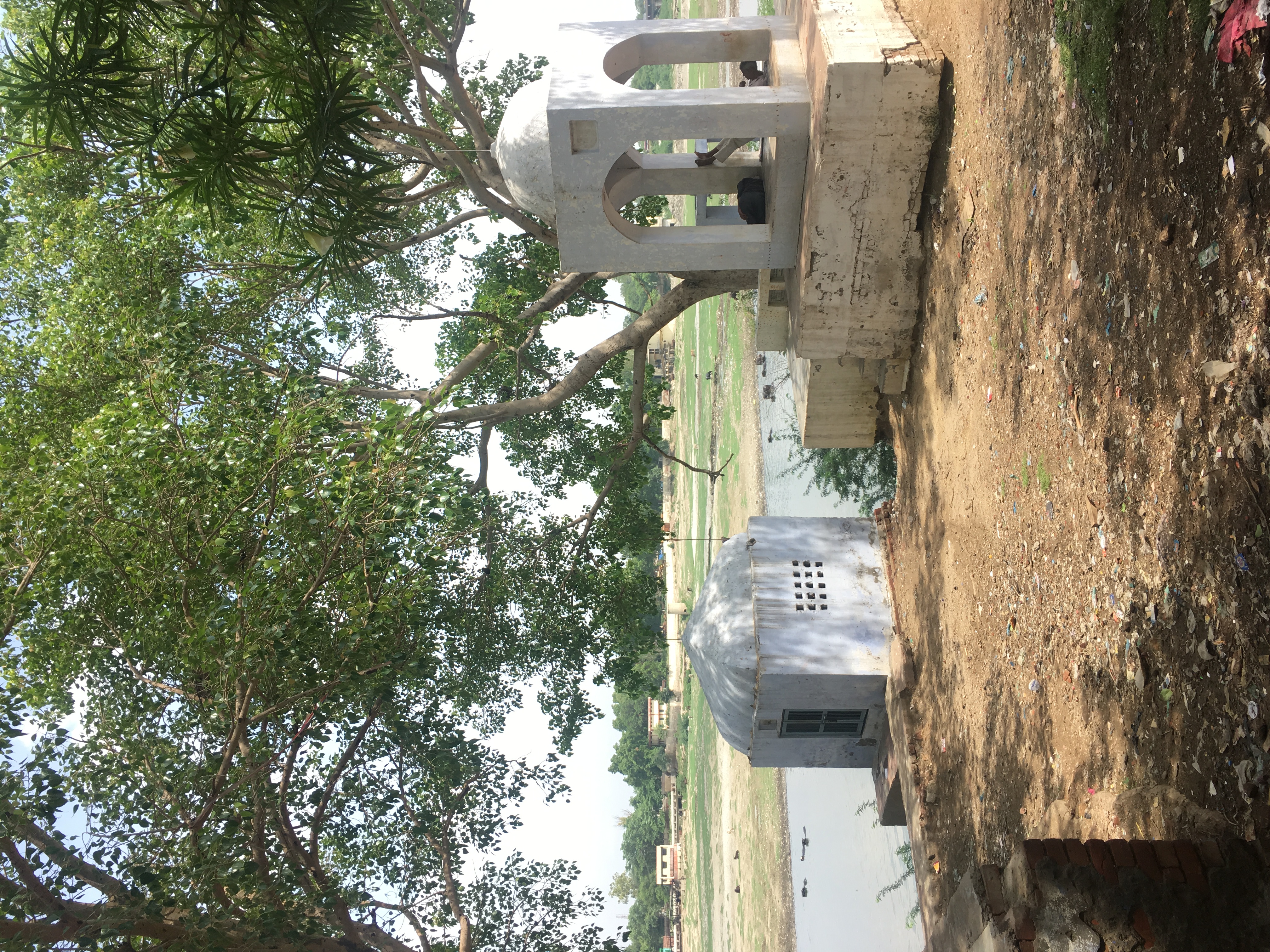 Image above by author: The Yamuna River as seen from the banks of Trans-Yamuna settlement, Katra Wazir Khan.

Slum households represent a spectrum of those at the bottom of the pyramid. Their living conditions are desperate and play host for many direct, indirect and cumulative impacts of climate change. These impacts are felt but the lack of resources to mitigate them makes adaptation a lesson in perseverance. Therefore, an efficient climate response must include strategies to resolve larger issues of development and build resilience for these communities; in other words, if you have a steady income and stable livelihood then adapting to climate impacts will be easier.

This post comes from research and observations made during fieldwork conducted by Pulkit as part of body of research on climate resilience by Vikrom Mathur, Director, Tandem Research thinktank with the Asia Foundation.