Last October Brazilian voters elected Jair Bolsonaro as their President for the next four years. The President is known for his extreme positions on women’s rights, LGBT and racial issues. Bolsonaro’s views coupled with his massive support from Congress, make his mandate a dangerous one for marginalised groups; and women’s rights are at the centre of this debate.

During his presidential campaign, Bolsonaro explicitly supported the idea that women should be paid less than their male co-workers because, “they can get pregnant”, that black people “are not even good for procreation”, and that his sons would never be gay nor date black women, “because they (his sons) are well educated”. One of the key mottos of Bolsonaro’s campaign was to bring back “traditional and familiar values”. Unsurprisingly, the strongest opposition during the electoral campaign came from women, who occupied the streets shouting #EleNão (#NotHim).

As soon as the mandate began the organs responsible for public policies for women were demoted and lost considerable funding, evidence that the topic is not going to be a priority for this government. On the contrary, women’s rights are now under the command of the evangelical pastor Damares Alves, who is openly opposed to the agenda. When it comes to the SRHR of Brazilian women, especially the right to abortion, opposition is crystal clear. In the past few years, similar to other countries in the region, feminist movements in Brazil have been simultaneously pushing for the decriminalization of abortion and mobilizing against the several bills and constitutional amendments aiming to undermine women’s sexual and reproductive rights.

In 2015 alone, over 400 thousand women had abortions in in Brazil. Nevertheless, for the vast majority of women in need of abortions, the procedure is only accessible through clandestine means, due to the fact that the procedure is only considered legal under three specific circumstances. Accessing public information about sexual and reproductive rights is extremely challenging and a significant amount of women are unaware of how to obtain proper health care. When seeking to terminate a pregnancy, most resort to illegal and frequently unsafe methods.

This picture is bound to worsen during Bolsonaro’s administration. His election relied heavily on endorsing far-right, conservative positions and so far he has continued to indicate his will to ban abortion completely, which would deepen the current crisis of public health. In addition, with the growth of fundamentalist narratives regarding sexual and reproductive health and rights, more and more Brazilians are declaring themselves against abortions.

In a country with deeply rooted inequality and racial disparities, the lack of access to sexual and reproductive health and rights in Brazil is likely to have especially strenuous repercussions for women of colour, poor women and women who live in less privileged regions. Those are the women who often face more obstacles while accessing healthcare and contraception, are usually less able to afford private doctors to perform the procedures, and are the ones who often carry social stigmas around their sexual and reproductive decisions. Another area where setbacks are expected is the implementation of policies towards ending violence against women. In the last decade, considerable legal advances were made, mainly with the promulgation of Maria da Penha Law in 2006 and the Feminicide Law in 2015. During the next four years of the Bolsonaro administration these improvements are likely to come to a halt.

The successful implementation of policies aimed to tackle violence against women and girls (VAWG) is heavily dependent on the endorsement of the executive branch. Without adequate budget, personnel and resources, public organs which were previously designed to mitigate VAWG have undergone recent changes which might hinder their ability to achieve that task.

Both the Maria da Penha Law and the Feminicide Law require funding, training, investments in infrastructure and awareness-raising in order to be effective. Currently, the implementation of anti-gender based violence (GBV) policies is unevenly distributed throughout the country, which means women’s access to resources is dependent on their location and on how the federal government allocates funds to different states and cities. With an administration that refuses to see VAWG as a priority, it is most likely that the poorer regions will continue to be underfunded and compromised.

VAWG is a phenomenon that affects Brazilian women differently depending on factors such as race, ethnicity, age, class, sexuality, origin, gender identity, able-bodiedness and location. For instance, while the number of violent deaths of black women increased by 54% between 2003 and 2013, the rate for white women decreased by 9.8% in the same period. Effective public policy to tackle VAWG needs to take social factors into account. Under the new administration, which publicly denies the existence of racism in the country, there is no hope for the implementation of public policies that adopt an intersectional approach to VAWG. 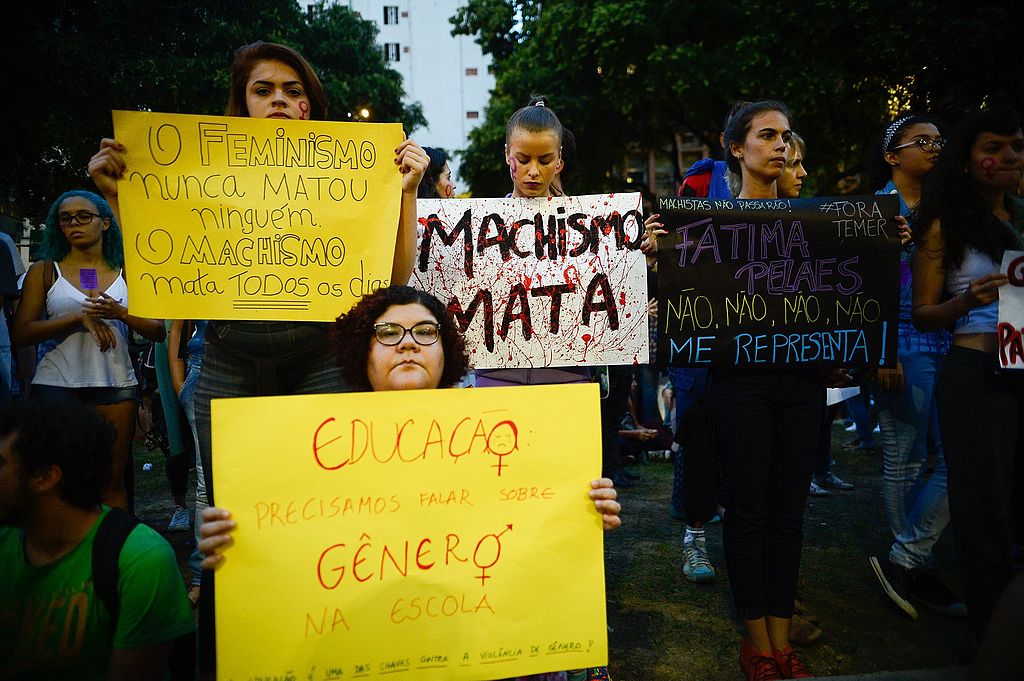 HOPE IN AGITATION NOT OBEDIENCE

Bolsonaro’s election was partially a response to the resurgence of feminist movements aiming to shake the old structures of Brazilian society. Since 2015, the increasing influence of these movements changed the way politics, education and personal relations are built and discussed in the country. Accordingly, as soon as Bolsonaro’s mandate began, the government initiated its counterattack on feminist activism and other social movements including LGBT, black and indigenous. Already, the actions and policies from the first few months of the new government point to the understanding that none of these groups will be heard by it during the next four years.

Under Bolsonaro’s presidency, the Brazilian feminist movement will have to fight to not lose current rights instead of lobbying to conquer new ones. However, even in this adverse scenario there is hope. The Feminist Spring raised the voices of women in informal and formal politics, with a considerable increase in the number of feminist women elected for the Congress and State Assemblies in 2018. There is also a growing number of frustrated electors of Bolsonaro already disappointed with the corruption allegations against his staff and inner circle, hinting that his mandate will not go by without resistance. And with so much at stake, women will be leading the opposition in the following years; in agitation not obedience.

This is one of a series of blogs written by current IDS MA students. Other blogs published include: autopsy of a failed climate change policy: the gilet jaune movement in France, inclusive governance, digital disruption and climate challenges, social work and international development, and social protection at CSW.