Current IDS student Myriam Mhamedi (MAGen32) shares her thoughts on the Yellow Vests; asking if they are an anti-ecology movement.

It’s been three months and the Gilet Jaune (Yellow Vest) movement in France is ongoing. The demands have evolved and the discourses are diverse, some more problematic than others, but the basis has always been the same: an outcry at inequalities between what is seen as the ‘elite’ and the ‘masses’. This anger of the less privileged part of the French population has been brewing for a long time, ever since Macron was a Minister under President Hollande. Yet, the spark which ignited the neon yellow fire of the current crisis was a somewhat small offense: an augmentation of gas taxations resulting in diesel being more expensive.

As Minister of the Economy, Emmanuel Macron was criticised for designing policies which felt disconnected from the realities of the people. Then when he was elected president, notably through an opposition vote against Marine Le Pen, he progressively lost popularity by appearing to favour the rich freeing them from a number of taxes, officially to make France more attractive for investors and prevent tax fraud. In this climate of outrage against the ‘President of the Rich’, this new tax on diesel, a product massively consumed by poor and middle-class households, was that much harder to swallow.

when this raise in gas prices hit the news in October, it did not take long for men and women from all corners of France to protest against what felt like another attack on the middle and lower class's budgets

Yes, this policy, supported by Macron’s government, was motivated by ecological reasons and was meant to lower the usage of fossil fuels. In other words, it was an attempt to reduce the carbon footprint of France, and the policy makes sense for a country that has pledged to reduce its greenhouse gas emissions by 75% by 2050. Yet, when this raise in gas prices hit the news in October, it did not take long for men and women from all corners of France to protest against what felt like another attack on the middle and lower class’s budgets. Since the 17th of November, the gilets jaunes movement, reaching 70% of favourable opinion in surveys, continues to take the streets every weekend. 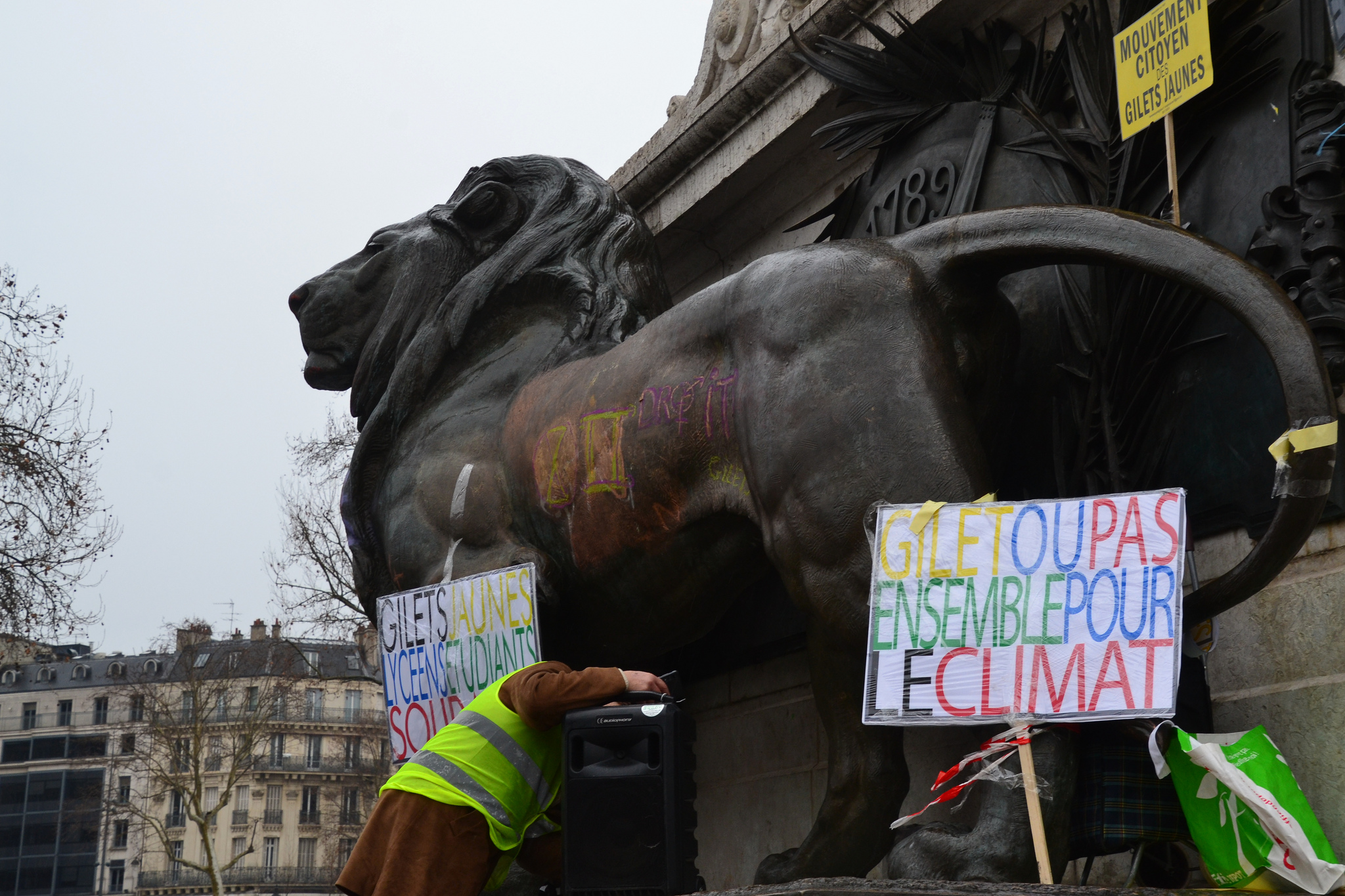 So, is it, as Macron’s party inferred several times, an anti-ecology movement? No.

The anger is not against ecology but at the specific measures taken which seem to only use ecology as a pretext to reach in the pockets of the masses. This new taxation follows a series of laws and policies which lowered taxes for the wealthiest part of the population with no satisfactory justifications or compensations for the rest. It also specifically targets fuel that is used by individual consumers and not by big transportation companies. For example, kerosene used in planes is arguably much more harmful to the climate.

The issue is that the policy did not take into account how necessary, even vital, cars are for the average citizen. Yes, if you live in Paris or in another big city with good public transport and access to all necessities, then the rise in gas prices might just push you to make the sustainable choice for your trip to the supermarket. But, if like the majority of the gilets jaunes, you live in the country, in a small city or village, then schools, hospitals and other services, are difficult to access without a car. Usually even urban people’s jobs necessitate daily car trips back and forth. Moreover, for a lot of the French territory alternatives to using cars, such as public transportation, are either unreliable or non-existent. So, when diesel got to the highest price it has ever been, it did not translate into an incentive to use less fuel but it did mean that the unavoidable consumption of fuel was going to weigh more on everyone’s means.

The 'gilets jaunes' are not asking the government to give up on ecology, but are calling for more opportunities to have a say on the policies, most notably through referendums

The saddest part is that the gilets jaunes protests are widely understood as scepticism towards ecological measures and a proof that the general population does not care about the planet or climate change. Yet, what the gilets jaunes are really protesting is a top-down unrealistic and counterproductive policy, that exemplifies the general feeling that Macron’s presidency is catering to the elite at the expense of the rest of the population. The gilets jaunes are not asking the government to give up on ecology but are calling for more opportunities to have a say on the policies, most notably through referendums. And as many gilets jaunes have said, the French people are in favour of ecology and of taking steps towards a more sustainable consumption, but they feel it should start by making big corporations comply with greenhouse gas reduction goals and not by issuing punitive measures on already struggling citizens. Simply put, responsibility for a sustainable future must be shared equitably between individuals and powerful businesses. In addition, the failures of the alternatives to fossil fuel usage must be fixed before creating barriers to their consumption, to avoid even more precarity. Image: Photo by ev on Unsplash

The biggest polluters in France never appear to pay the price for their impact on the planet while the impoverished citizens are the ones who have to make the effort to change their behaviour.

Indeed, more than anything, the issue here is how unfair climate change related policies have been. Inequalities in access to energy are as much of an ecological problem as greenhouse gases are and tackling the latter by worsening the former is really missing the point of sustainability. The biggest polluters in France never appear to pay the price for their impact on the planet while the impoverished citizens are the ones who have to make the effort to change their behaviour. The resource poor citizens will also be among the first to deal with the consequences of climate change in the, less and less distant, future.

Effectively tackling climate change can only be done by involving everyone equitably, and with a constant consideration for social justice

So, yes, the latest UN Intergovernmental Panel on Climate Change (IPCC) report has confirmed that the emergency of the current climate situation means that fast and impactful policies cannot be avoided. However, the lesson to be taken from the gilets jaunes vs. carbon tax story is that the ideal of sustainable development must include social and economic aspects. Effectively tackling climate change can only be done by involving everyone equitably, and with a constant consideration for social justice.

(Main Image Link: Image: Patrice CALATAYU (CC BY-SA 2.0) on Flickr)
This is the one in a series of blogs written by current IDS MA students. Other blogs you might like include; social work and development practice, digital disruption and climate challenges, inclusive globalization, social protection at CSW, and women's rights in Brazil. The set of Employability Skills presented in the chart below has been developed by IDS, the Department of International … More...