Review of the 2019 IDS Panto (including downloadable sing-a-long booklet) and (NEW MARCH 2020) watch the video! The pantomime genre is a strange one, especially if you weren’t brought up in Britain. They are loud, fun and enjoyable musical comedy theatre productions are a show like no other.

Brief outline of the plot and themes

This year’s IDS Panto was loosely based on JK Rowling’s Harry Potter’s Chamber of Secrets – Chambers of Secrets (there’s your Robert reference before we even started!).

The pre-panto advertising this year set a new standard with posters from the “IDS Students for Social Responsibility” appearing around the IDS building weeks before you could even purchase a ticket (still a bargain at just £2). 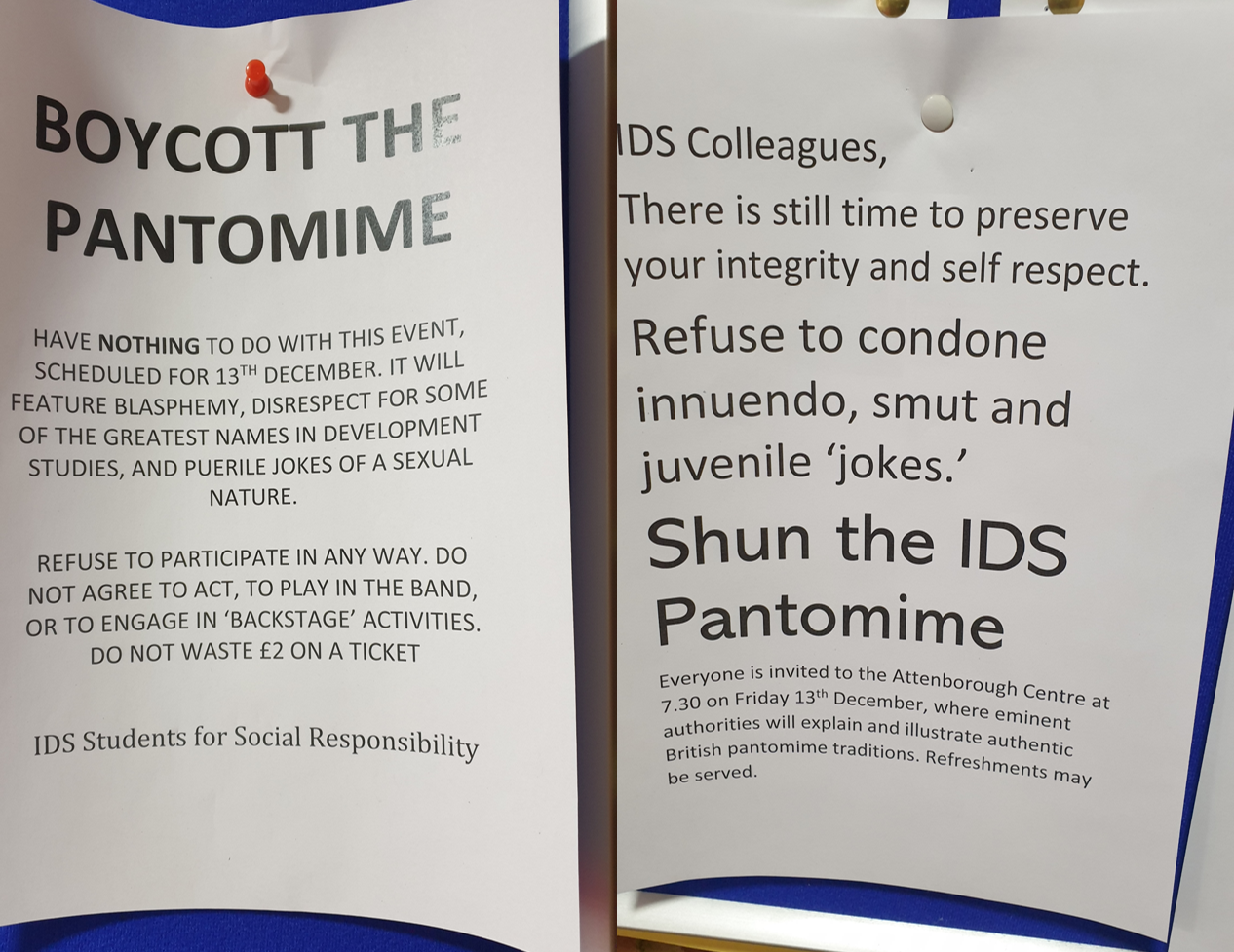 This year’s Panto was the usual IDS mix of capitalist greed, climate change, bedazzle and Bollywood. We are quickly introduced to the characters of Greta Hermione (the hero), Prince Harry Chambers (who disappears in the middle of scene 1), Ronny Chambers (looking for his father), and Katy Hatekins all heading to the Institute of Hogwash to start their studies. The IDS sorting hat makes sure they are all in MA Development Studies, and not in any of the specialised courses (“they’re just modules of MADev anyway”, according Linda McDonagall). Download the sing-along booklet and discover future hits like "the thick plottens" and "scramble for Hogwash". Image by Mahmudul Hoque Moni: logo of the Institute of Hogwash (IOH)
.
Ness Filch (and her pet seagull Mr. Paulo) discover oil at IDS, and Melissa Dumbledore hatches a plan to sell the oil to fund IDS research and pensions. Overheard by Greta and Bog Chambers, Greta sets out to rally everyone to be against oil being used, and Bog Chambers thinks about the wonderful retirement he will be able to have with all that lovely oil money sloshing around. Meanwhile, Ronny is looking for their father – following the familiar smell of apples, Katy is sneaking around on the trail of a Daily Mail worthy story, and Melissa continues to turn frowns upside down with a flick of her wand and considerable amount of bedazzle. Image by Mahmudul Hoque Moni: Melissa Dumbledore (bedazzle!)
A meeting of world leaders – the scramble for IDS – including the EU, Commonwealth and the c-Evil society (Trump, Boris, and Putin), descends into a (comedy slapstick) fist fight. Obama’s speech doesn’t save the world, but, it turns out, Bollywood dancing does help.
After the discovery that IDS never had any oil to start with, we get our happily ever after with the reuniting of Ronny’s parents – Bog and Sangita – and the uniting of Bog and Ronny. Although Greta continues to despair at the lack of interest in the climate emergency.
Another marvellous year for the great IDS Pantomime tradition our congratulations to everyone involved whether on stage or backstage. As in previous years, Panto has been filmed for posterity and the online version is now ready. There were some technical difficulties with recording, so there's a chunk missing - specifically mid Scene1-mid Scene 2 (no Sorting Hat and no Happy Days song) Can you help find the new Chair of the Board of Trustees at IDS? More... A list of resources from LSE that may be useful in your career planning More... Sharing the best in global development research for policy and practice. More...

Read about Md Mamanur Rahman's recollections of IDS and his career since graduating from IDS with an MA in Gender & Deve… More...